This year we decided that we would head to the sun for our overseas trip. Nerja was the destination for the seventeen members who travelled and Vernon put some great preparation into the trip. Himself and Emily did the leading.


The first three days saw us trek to places like the Cruz de Pinto, the Cruz de Felix, the valley of the Higeuron, the Mediterranean "white villages" of  Frigiliana and Maro, the Shadow of the Wolf (at 800 metres, thr highest point reached during the week) and Rufino`s Cottage, Acebuchal (known as "the Hidden Village") with its tragic association with the Spanish Civil War. The weather was hot but sure the views were great!

Day 4 was a rest day. Some decided to visit the caves of Maro, some went shopping and an intrepid group of 6 went kayaking near the sea caves. The second last walk involved a trek from Maro to Frigiliana via the Pinarillo Track and Barranco de Coladillas and Chillar River. The final seven kilometre unshaded trek to Frigilliana made some of us wonder why didn`t we take the bus? The last walk was a coastal walk of sorts, from Herradura to Playa Cantijirian, ending with lunch in a chiringuito (beach bar). A fitting end to a great week!


For the second year in a row bad weather put a damper on our spring weekend away. Our planned Sunday walk which involved following the St. Finbarr Pilgrim Path over the Sheehy Mountains down into Gougane Barra had to be cancelled due to the wind and rain. Instead six hardy souls rambled around the woods for a couple of hours.

Our Saturday walk on the Sheep`s Head went ahead thankfully. Twenty four of us started out from the Black Gate car park at 10.00 and made our way up onto the low ridge that dominates the peninsula. Visibility wasn`t great and the winds were strong enough but thankfully the rain held off as we passed Cahurlagh Marriage Stone, Laharanmhadra Lough, a Napoleonic signal tower, Doo Lough, a second world war lookout shelter, Lough Akeen.  Bernie`s Cupán Tae provided some welcome respite before we headed for the Light House at the western tip of Sheep`s Head.

With the weather forecast in mind, a chat was needed at this stage and this brought a group decision to plough on and complete the intended walk. We took a second lunch in a reasonably sheltered spot above Foilemore Cliffs. From here we continued eastward along the northern side of the peninsula with nary a glimpse of Béara across the gloom of Bantry Bay. On reaching the dramatic Eskraha sea fissures the weather worsened and we got seriously drenched over the last four kilometres as we made our way up from The Cove over the “sting in the tail” central spine to return to the sanctuary of the bus at the Black Gate.

Ramblers back in the Lake District - June `18

The club`s second trip to Cumbria`s Lake District proved to be a bit of a sizzling experience! With temperatures in the high twenties three walks in three days set us a serious challenge. Thankfully Ambleside worked out to be a very suitable base, with its proximity to Wordsworth country and the stunning Langdale Valley.


The key aim for most of the group was to do Scafell Pike, England`s highest mountain. Accordingly, we decided to tackle it on day one, doing a south to north traverse, starting at Dungeon Ghyll in Langdale and finishing at Seathwaite Farm in Borrowdale. Sixteen of us used plenty of water and sun cream to help us survive in the heat for 8 hours! The highlight of the walk for some had nothing to do with the stunning views, rather the cool waters of Angle and Styhead Tarns. As one member put it, it was the first time that he had two swims on the one walk.


Day two saw twenty of us do the “Wordsworth Walk” – a leisurely lakeside ramble from Ambleside to Grasmere, following the old Coffin Trail to the east of Rydal Water and Lake Grasmere on the way out and the lower slopes of Loughrigg Fell on the way back. A visit to Wordsworth`s grave in Grasmere was obligatory while a visit to one of the poet`s homes at Dove Cottage inspired a recital of some of his poetry by two of our more “cultured” members.


By day three we had only seven “real” walkers left, the more sensible ones heading for a boat trip on Lake Windermere. Off with us seven to do Crinkle Crags in Langdale. This proved a very interesting walk with a little bit of scrambling thrown in just to make us feel even more wrecked. One of the highlights was undoubtedly Josh`s impressive negotiation of the “Bad Step” to reach the summit of the second Crinkle. There was a little “debate” on the identity of a distant lake. In light of the absence of conclusive proof we decided that we had discovered a new lake and the witty Sasanach in our midst felt we should call it “Mick`s Mere”.


Eventually it was time to return home, and even though the attempt at a sing song on the last night could have been better, most would agree that we had just had a very memorable trip.


Ramblers back in Killarney Spring `18

Twenty four of us turned up on Saturday morning for the planned challenging linear walk along the Caher Ridge to Carrauntoohil. Because of the large numbers we decided to divide up into two groups consisting of 16 hardy annuals and eight half-hardy ones. Both groups started from the Hydro Road car park near Lough Acoose. The first two hours involved a lot of hard work as we climbed up the southern shoulder of the beautiful Coumloughra glen with its ribbon lakes. Behind us to the north the views to the north and west expanded as we gained height – Dingle Bay and the mountains of Dingle Peninsula, Inch Strand, Glenbeigh, Lough Caragh.


When we reached Caher West at 975 metres elevation, we had reached the Caher Ridge proper. From here the ridge first trended east then north east for the final pull up to Carrauntoohil. The weather while dry with good if intermittent visibility, was now posing a serious problem because of strong winds and dangerous gusts. Down to our right lay the Bridia and Black Valleys with lovely lakes like Curraghmore and Cummeenduff Loughs. Beyond them lay the sea of mountains that populate the Iveragh Peninsula. We could make out the towering Bruaghnabinnia, Knockaunattin and Mullaghanattin, “the Kerry Matterhorn”. Unfortunately, we could devote little time to the beauty before us as all our attention was needed to make our way safely across the arete`s narrow rocky path in the dangerous windy conditions.


After lunch on the roof of Ireland we faced another daunting challenge – the descent down the 300 metres high Devil`s Ladder. The lower third was especially iffy as a lot of the scree and boulders here were wet. The final trek through the Hag`s Glen between Loughs Gouragh and Callee and alongside the Gadagh stream was uneventful and soon our destination in Cronin`s Yard was reached. Here the hardy annuals enjoyed a cuppa while they waited for the half-hardy ones who were enjoying a couple of torrential showers over the last half an hour or so!


On Sunday the intention was to do Torc Mountain. However, the exertions of Saturday together with the forecast of heavy showers put paid to that. The resultant change of plan led to a walk akin to one devised by a committee i.e. it was democratically arrived at, had plenty input, had the odd mistake, and took longer to complete than originally intended! Still, the result wasn`t half bad and we even discovered Cardiac Hill on the northern flanks of Torc Mountain, although we didn`t count the steps!

Ramblers in the Dolomites  June `17

This coum is probably one of the Comeraghs` least known and least visited coums. Like many Comeragh places its name is gaelic in origin – “Com Dubh Fhalla” – the hollow of the black wall. Coumduala lies at about 468 metres elevation on the south-eastern flanks of Knockanaffrin Ridge, just over one kilometre north of the Gap. It has the typical cliff-edged back and side walls of a once ice-occupied mountain hollow. The hollow/coum is home to a fine lake and its eastern flank has one of the best examples of an impounding end moraine in the Comeraghs.

Knockanaffrin Ridge offers us an insight into the vagaries of ice action. Its south-western flanks overlook the Nire Valley and have little evidence of erosion by ice. Its north-eastern flanks however have two fine coums – Lough Mohra and Lough Coumduala. The darker and colder north-easterly aspect it would seem was enough to guarantee long periods of ice action on this side of the ridge, culminating in the creation of two impressive coums.

The easiest way to access Coumduala is probably from an old farm yard at Curraheen – Grid Reference S 307154. Travel west along the R678 from Rathgormack. After about 3 kilometres, turn left/south towards the mountains at Clondonnell Cross. A further 3 kilometres brings you to the farm yard. This is the trailhead for a couple of way-marked walks. One of these is a 2 hour/5 kilometre out-and-back walk to Coumduala. Follow the way markers down an old boreen, across a couple of fields and stiles to the open mountain. The “saddle on the horse`s back” to your left is the Gap. You must travel right or west and uphill from here however - towards the dark hole in the ridge.

We are talking about one of the Comeraghs` loneliest coums. You are unlikely to meet another soul should you seek it out. In summer you may hear the cuckoo. In winter the coum is dark and brooding and living up to its name. In wet weather small cascades may be encountered as you follow the headwaters of the Clodiagh into the coum. Spot the mountain ash growing up through the huge erratic boulders transported down slope by ice. You negotiate two recessional moraines before you eventually have to climb over the lip or end moraine holding in the lake. A sheep path on the other side of the outlet stream leads across the mountainside to the Gap if you feel like exploring further. Go on – discover this lovely place. 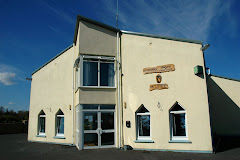 Frozen Coumduala with its End Moraine 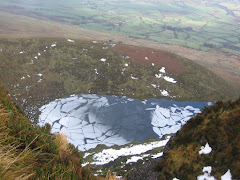